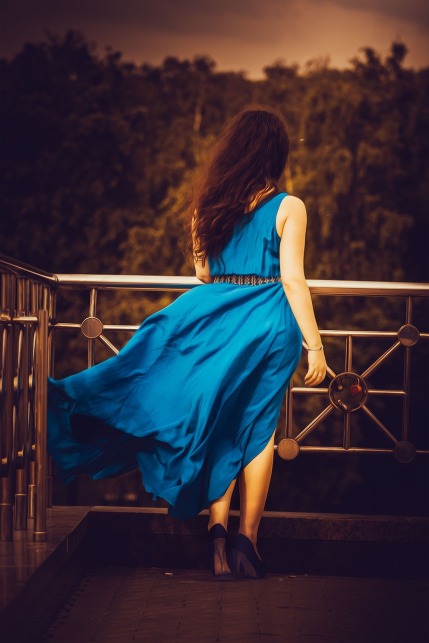 I knew it made me stand out. It was a shot of colour in a drab town.

My Godmother presented it to me on my 21st birthday. For my “coming-of-age” she told me, smiling but with sadness in her eyes and a sigh on her lips. I understood. Traditionally, mothers would throw a massive party for their daughter’s coming of age, as if to say, “Look, my daughter is an adult, she is here!” The ladies of the town would gather for wine and sweetmeats, and the mother would instruct the girl on how to make her way in the world as an adult. With no mother, it would fall to my Godmother to induct me into adulthood, but the rules were strict. There would be no gathering, as only a mother could announce her daughter’s age publically. My Godmother could give me advice, but my entrance into public life would be without ceremony.

I eased the dress out from the whispering paper and help it up against myself. The air seemed to vibrate around it. In had never seen anything so beautiful.

My Godmother helped me into the dress. She had chosen well as the fit was perfect.

“Be careful how you wear it, there is power in this dress,” she said, the twinkle back in her eye.

She led me to the mirror so I could see the effect. Then she hugged me and whispered, “Your mother would have been proud”. Momentarily, time seemed to stand still as I held my breath and glanced around. But the world kept turning. No one had talked of my mother in this house for as long as I could remember. It wasn’t done to speak of those who had gone. And though my father was away on business, he had ears everywhere.

My Godmother winked as she released me from her embrace. I knew then that I would be safe. There was magic in her, and I knew she would watch over me.

I made us tea, and she began to speak, teaching me the ways of the world. We saw in the dawn together, marking my entry into adulthood, then she returned to her own family, leaving me to face the new world on my own.