This item didn’t make it onto my original list because I wasn’t sure how I was going to make time to fit it in. But with the wonders of modern technology I have found a lovely online bookish community (which counts, as far as I’m concerned). And I fear that a couple of my other tasks may not be quite achievable so adding extras will hopefully cover the ones that get missed… 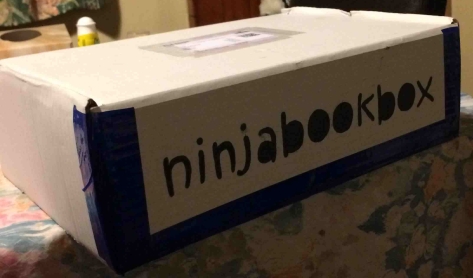 I came across a blog talking about ninjabookbox late last autumn – it originated in a Kickstarter campaign which I was immediately gutted I had missed out on. Ninjabookbox is a book subscription service – every quarter subscribers receive an independently published book and a number of related gifts – the amount of gifts vary depending on your level of subscription. I was intrigued by the idea and so I signed up for the mailing list. Shortly before each box goes on sale its theme is announced, so as soon as I heard that the next box was ‘A Shakespearean mystery’ I couldn’t resist ordering the mini box (the book and one gift), you know, just to see. I was so enamoured when I received it that it wasn’t long before I signed up for a recurring mini box subscription. I also found out that there were a few of the original box left, so I quickly got myself one of those too… 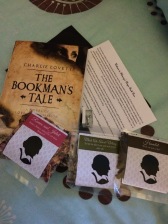 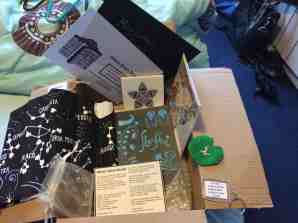 So I have now received three of the quarterly boxes and have loved all three books – my first was The Bookman’s Tale, the Shakespearean mystery in which an antiquarian bookseller is launched into a complex tale of bribery, forgery, and danger when he comes a cross a Victorian watercolour which looks exactly like his late wife. The first book (and the second one I received) was Star Shot – an instant winner with me because it is set in my favourite city of them all, Cardiff. The story is a bit surreal, and follows various characters who stories beautifully overlap as they try to make sense of a web of silence that slowly seems to be seeping across the city. The third box came in May and I just finished the book this weekend – Dragon’s Green – a fantasy novel for children in which the main characters find their hidden strengths and learn the power of friendship, bravery and books. I also gave into temptation and bought the summer special box – A Grand Adventure – which contained three books, and I have just started the first of these. 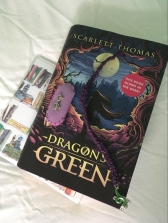 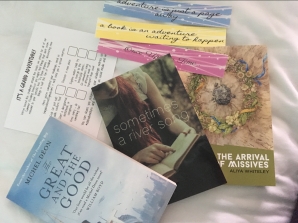 Part of the idea of the boxes is that there will be a chance to discuss the books with other subscribers, this has yet to find its best format, but I’m already enjoying the engagement with other readers I have found through the forum on the website and on twitter. And its not just about the books in the boxes, for our Summer Reading Challenge we have each picked our own books to read over the summer and encouragements and recommendations have abounded.

My two favourite things about the ninjabookbox are:

So, hopefully I’ve succeeded in recommending the ninjabookbox to you. If you would like to find out more, head over to their website at www.ninjabookbox.com where you can sign up to their mailing list or buy lots of lovely bookish things in their shop. The August boxes go on sale soon too! (I think there may even be a few summer special boxes left). If you do want to buy anything, you can get a 15% discount by using the code CERI15 – this can be applied to anything except the quarterly recurring subscriptions.