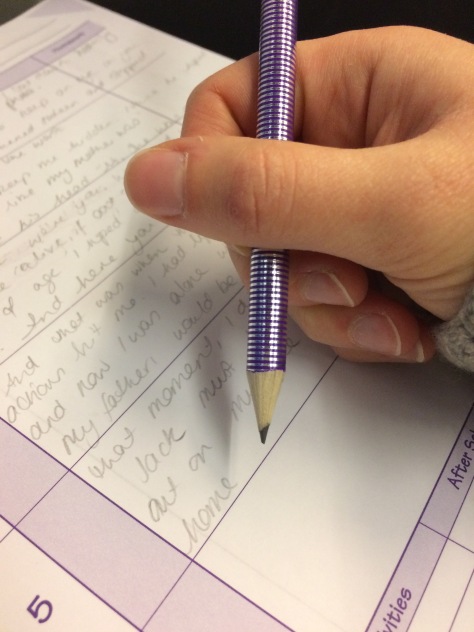 I often have really vivid dreams that stay with me a long time after I wake up. Sometimes these are just the jumbled meanderings of my subconscious trying to make sense of my life – like the time I was stressed about work and dreamt that someone had rearranged the office over the weekend and I couldn’t find my desk. Occasionally, though, a crazy dream brings me the nugget of an idea for a story. I had one such dream last summer.

It started with a picture of a girl wearing, you guessed it, and electric blue dress. Actually, when I woke up the story was nearly fully formed, I just needed to write it down. But finding time to put pen to paper is never easy and that first day after the dream I just had time to sketch out the first scene. Then life happened and my creative writing ended up on the back burner again.

But the girl in the dress stayed in the back of my mind, and I knew I needed to tell her story. So it only seemed fair to her to make it part of my #30by30 challenge. In November I was meeting up with a friend in Bath so I took my notebook and pencil on the train and used the journey time to write, but it wasn’t quite long enough. So my notebook went on holiday with me over Christmas (it’s a big ole notebook so I could have done without the weight, I probably should get a smaller one… if you’re wondering, that is my notebook in the picture, in a former life it was my teacher’s planner. I hate to be wasteful). I finished the story in my hotel room overlooking the sea.

I’m pretty pleased with how it turned out. I spent last weekend typing it up and editing it, although, being so short, it didn’t need much work to make it presentable. And I’m going to share it here over the next couple of weeks. I’ll put the first part up later today (I know, two posts in one day! What is the world coming to?!)

I’ve had a hard time explaining the genre to my friends, it’s part urban fantasy, part dystopian, part ghost story. Actually, when I thought about it, I decided the best way of explaining it is as a fairy story. There’s a kind of princess, a sort of wicked king, an almost knight in shining armour and a definite fairy godmother so I think that’s what I’ll call it – a modern fairytale.

Are you sitting comfortably? Then I’ll begin…