Sorry it’s been a while again. April turned into a surprisingly busy month, which came and went in a flurry of activity and weather. And then May snuck in out of nowhere and took me by surprise – but I think things should settle down into more of a routine now.

So I thought I’d bring you an update on my reading/book buying/writing New Years Resolutions and how they are going. Short answer: things never go to plan, do they?!

Writing is the quickest one to cover – I’ve not been doing much (can you tell?) but I still intend to do more. I’m trying to figure a few things out about the future at the moment, including how writing will fit into it, but I do miss writing fiction and I want to make more time for that in my life. I will get there!

In terms of buying books, I have fallen off the wagon a few times… Of the fifteen books I have bought so far this year, five were for Ninjabookclub and one was in a Ninjabookbox. Two my Vicar recommended to help with the whole figuring out the future thing (he would have lent them to me but someone else was borrowing them). That leaves seven which I have no excuse for, other than that they were cheap or signed copies and I wanted them. Still I certainly have had worse starts to the year in terms of book buying. I’m aiming to read all the books I buy this year this year in an attempt to justify their purchase (one of them is no. 4 in a series, of which I have only read one so far, so that will be fun…)

I have had some success in unhauling this year, though. In January my parents and I sorted through a number of boxes they are keeping in their attic for me, which included many books I had kept from my childhood. I gave two boxes to friends for their kids and one box to a charity shop. Since then I have also weeded out a few more from my shelves which I was not excited about reading any more. I am also stricter with myself about not keeping books I have read unless I gave them 4 or more stars.

Each year I set my Goodreads target as one higher than the number of books I read the previous year, meaning my target for this year is 78 books. Currently I have read 29, which is three books ahead of schedule. You would think that this would mean my TBR is decreasing, but, surprisingly, it is not. The main problem is how easily I can request books from the library. Southampton City Libraries allow you to request any books from any of their libraries for free, and they have a great range. I have borrowed fifteen books from the library this year so far, eight of which I have read and seven I am currently borrowing.

So my TBR shelf on Goodreads has only gone down by four since the start of the year. And I’m not even sure I’ve added all the books I bought to it…

So in an attempt to address this I have started coming up with a monthly TBR, which includes a mixture of books I have bought and borrowed. I am usually a bit ambitious to allow for mood reading. I am going to try not to borrow any more library books until I have read everything I have borrowed from family and friends as well. And I’m going to try EVEN HARDER not to buy books other than for NinjaBookClub… (let’s see how that goes!)

Last weekend was Dewey’s 24 hour Readathon, which I took part in for the first time. I joined over 1900 other readers and together we read half a million pages in 24 hours. I wasn’t able to join in the whole 24 hours, but I did enjoy focusing on reading time instead of watching tv, etc. I will take part in the next one in October for sure. I am also on the lookout for other readathons/readalongs I can take part in, to help tackle my TBR with focused reading. This one was easy because there were no stipulations as to genres or categories. I have come across several intriguing sounding readathons on BookTube (the bookish area of YouTube) that I have thought about taking part in but I would have had to resort to buying books for some of the prompts and we already know I am trying to avoid that!

But the other day I came across a readathon with fewer categories and I already had books to meet all of them! So today I have started the Disney Readalong, hosted on BookTube by Cherrie Walker, Tiny Book Dragon and Cristina’s Journey. The readathon is from 6-12thMay and there are five prompts as follows:

Here is my TBR for the week: 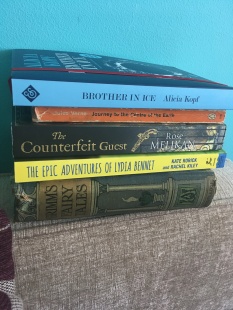 They are all fairly short – The Counterfeit Guest is the longest but based on the first in the series it won’t be too challenging a read and I am saving it for last anyway! I started Brother in Ice this morning and it is really good so far. I’m not sure I’ve ever read anything like it before.

I will be tweeting my reading for the week, probably from my personal twitter rather than the blog twitter (@cerilouisew rather than @mayibethemoon) but please feel free to follow both accounts…!!