Psalms 9 and 10 were originally one Psalm, so consider this post like to be like the first of a two-part episode of your favourite show (or any show, I’m not assuming you like my blog more than anything else you read online…). Together the structure of the two Psalms forms an acrostic poem, with each stanza beginning with the next letter of the Hebrew alphabet, and there are several other Psalms that follow this pattern.

David, in this Psalm, tells us he is continually praising the LORD, the Good God, and telling people of what He has done. He is thankful, for God has overcome David’s enemies – those who are not righteous cannot stand in the presence of a Holy God. God is a righteous judge who rebukes those who persist in wickedness. He rules over the earth. David makes it clear that God will judge the earth and that He loves justice to be done, but he also wants us to know that God is a safe haven, a refuge, for those who seek after Him and want to know Him. He says to God: “those who know your name put their trust in You”. (v10)

This made me reflect on what names we know God by. I’ve said before, and will say many times in the future, that when we see God called ‘God’ in the Bible it is a translation of the word Elohim, which refers to God’s greatness, as in the first chapter of Genesis when God’s creative power is established. When we see the word ‘LORD’ used, written all in capitals, it refers to God’s covenant name, Yahweh, which is used to emphasis His goodness. The clearest example of this is Exodus 33/34, when Moses asks to see God and God says that He will pass by Moses and declare His name over Him. And this is what happened: ‘The Lord descended in the cloud and stood with him there, and proclaimed the name of the Lord. 6 The Lord passed before him and proclaimed, “The Lord, the Lord, a God merciful and gracious, slow to anger, and abounding in steadfast love and faithfulness, 7 keeping steadfast love for thousands, forgiving iniquity and transgression and sin, but who will by no means clear the guilty, visiting the iniquity of the fathers on the children and the children’s children, to the third and the fourth generation.” 8 And Moses quickly bowed his head toward the earth and worshiped.’

Notice how long God’s name is?! Because knowing God’s name is about more than knowing what to call Him. Knowing God’s name means recognising His character: His love, His grace, His mercy, His compassion, His faithfulness, His forgiveness, His judgement. And Moses’ response to hearing God’s name is the same as David’s, and is what ours should be: worship. Recognising the truth of what God’s character is like can only lead us to praising Him and telling others of His goodness and greatness. Seek Him, and lead others to Him. 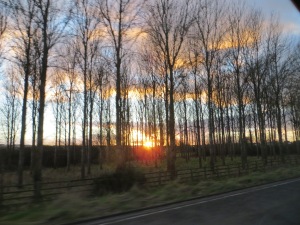