This has been one of my favourite Psalms for a long time, partly because it was recited in a song on a favourite album when I was a teenager, so I knew it word for word at one point.

I love the assurance with which David speaks of God. He knows God will answer, he doesn’t doubt that in the slightest. Even when people are trying to bad mouth him, or doubt his God, he knows, is certain that God hears him. He knows that God is the source of his righteousness (v1), his joy (v7) and his security (v8). He also knows that God will bring justice, that those spreading lies about him will be shown to be deceitful and that he is set apart by God as righteous.

There is also some very wise advice in verses four and five. “Be angry, and do not sin” (or, “In your anger, do not sin” as the NIV puts it). A few weeks ago a good friend of mine was in a situation where he got so angry he was about ready to punch someone who was really winding him up. I have never seen him so angry. And he walked away. He let someone else make the peace and he went off by himself to calm down. He did not let his anger control him. He wasn’t wrong to get angry, but he would have been wrong to act out of his anger. In Ephesians 4v26, Paul quotes this verse and takes it a little bit further: he instructs us not to go to bed angry, to always try to make peace within ourselves before the sun goes down. This action of letting go of what has wound us up is another way of letting God be God, and trusting Him to make things right.

We don’t have to make sacrifices in the way they did in the Old Testament, but there are sacrifices we need to make to help us be right with God (v5). Letting go of things that anger or upset us and choosing to forgive is one way. Last week someone upset me and I really wanted to get them back by doing the same thing to them that they had done to me, so they would know how it had felt. Instead I chose to do something nice for them, and they came and thanked me and I was so glad I had chosen helping instead of hurting, as that only leads to a cycle of pain and revenge.

In choosing to follow God, we have to give up a lot, Jesus asks His disciples repeatedly to leave their homes and security and to follow Him, assuring them that they will face many trials and persecution along the way. There have been many times in my life where all I could do was cling onto the slivers of faith and just trust and hope that God would pull me through, and He always does. David finishes off the Psalm with the assurance that God will give him rest and security. We may not have it easy when we follow God, but we know that He is with us through everything and is working for our good, and it is so worth it.

When I think about sacrifice, I am reminded of that amazing quote from Jim Elliot, a man who put is faith into action and was killed trying to share the gospel with the Aucas in Ecuador in the 1950s. He said: “He is no fool who gives up what he cannot keep to gain that which he cannot lose.” 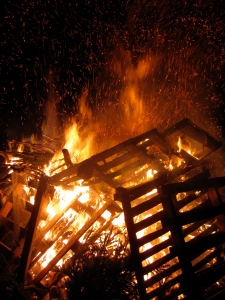 2 thoughts on “the art of giving up”